In Hindi we have a saying, “Khali dimag shaitan ka ghar hota hai” meaning that a brain that has no work, is a demon’s abode. This – at least I believe – holds true for Ajay. Ajay is a thirteen-year-old Yadav boy in Janwaar. He is pretty good at school, although he doesn’t show up regularly. He is one of our best skateboarders. He is good in other sports too. And he has a lot of time. What to do? Having no choices and options inside the village it’s very tempting for him to explore what he doesn’t know. And this he very often does with the wrong people, mostly a few years older than him. It’s then when he gambles, chews tobacco, fights, teases and what not. He’s always wearing a slightly naughty smile. And he is certainly always ready to jump 🙂

In one line – it would be a pity to see him fall to the wrong side. So we try as much as we can and include him in our activities, especially those off the skatepark. Lucky us he loves to travel – so we take him along with others as often as we can. But this is sometimes quite a challenge. During our last train journey, he was teasing Saraswati so much that she started crying. And it seemed the more she was crying the more he was teasing her. After a few discussions, Ajay decided not to talk to Saraswati at all – but even this didn’t last long. It was a tough ride.

Just recently we gave him another chance. He is currently with six other children on a 3-week journey from Janwaar via Varanasi to Assam. And … surprisingly enough, Ajay is not teasing anyone more than usual. Instead, he is involving everyone in having much more fun. Since he is not shy to speak up and doesn’t care if he is making fool of himself, others follow his lead. The result: all of them are having fun to the fullest.

Ajay learns from everyone he meets. Here in Assam at Parijat Academy, he has shown a completely new side of his. He is funny, sharing and caring. He is talking with everyone, let it be a 10-year old going to school, a 20-year-old pursuing Bachelors in Commerce, or the elders at Parijat Academy. He is learning from everyone and teaching his skills to everyone else.

Being inspired by the new learning environment at Parijat Academy Ajay has now started to write. Unexpectedly he came to me and showed me a page he had written about Janwaar. I gave him a notebook. He said he would write more of his stories and experiences. Below is an excerpt from what he has written. Rest, he said, he’ll show only when he has written a lot more. Fair enough 🙂 And honestly I can’t wait to read more …

Here’s the translation of the first page:

“A madam came from Germany and built a skatepark in our village. But no one came to skate initially. Then Roshan uncle (remark: a villager in Janwaar) told us not to worry, nothing will happen. One day Ulrike asked if the kids wanted to visit Khajuraho and the kids said yes. The next day we went to Khajuraho. We traveled to Khajuraho, ate in a restaurant and stayed at Mamaji’s place. We also saw an airplane for the very first time. Then we came back to Janwaar. My parents asked me if there was any trouble and I said no trouble at all.

Next, when I went to the skatepark, a summer camp was going on. I went there and practiced dance, skateboarding, and singing. I chose to go to the dance classes. The Sir asked my name and I told him that my name is Ajay Singh Yadav. And then I started dancing.

I started to skate.” 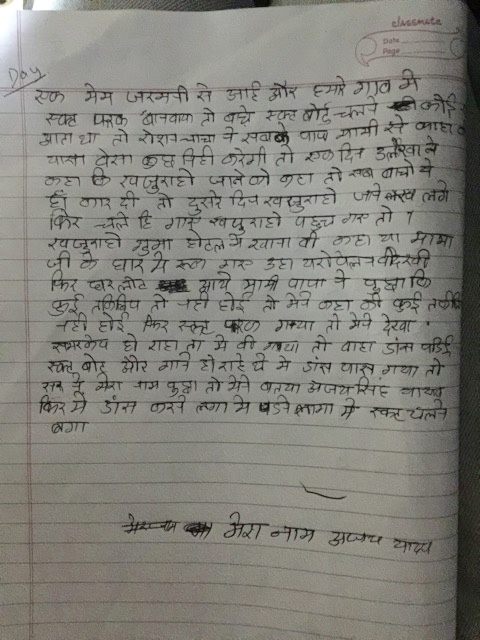