Suman, a ten-year-old Adivasi girl, was never seen talking to anyone. Many kids at the skatepark didn’t even know her name. They pointed at her and told me that she had started to skateboard. She always looked a bit shabby and lost in this new environment. Nevertheless I felt challenged so I asked her if she would like to travel with some other Janwaar kids and myself from Janwaar via Varanasi to Guwahati. We’ve had a pretty interesting mix of kids in the group, Adivasi and Yadav, only two girls, some “experienced” travelers and some of the kids who have never been outside Janwaar.

Of course Suman said no. What did I expect? But a few minutes later she returned and said: “My mother said I should go!” Wow, I was so surprised that I went to see the mother to confirm if Suman was right. It turned out that Suman is Ajay’s sister, who was anyhow part of the travel group, so the mother was really comfortable sending her. For whatever reason, I was happy she was coming, but also a bit worried – was she too young to be away from home? We were preparing a two-week journey. With Suman, I was almost sure, that at some point she would feel homesick, start crying and then …? I don’t know … I simply brushed my doubts aside and I was confident I’d figure out a way when needed.

Suman was mostly silent. She never spoke unless she was asked. “No” was her default answer. Even for food she would say no, but when the food was on the table, she ate quietly and quite a lot 🙂 Jayanti, the other girl in our group, dominated Suman like a Yadav usually treats an Adivasi, still Suman would follow her, because these two were they only girls. But I could sense Suman was having fun. In Varanasi she started to smile and laugh. That was a start. She participated in everything we did – roaming around on the ghats, cruising the Ganga on a boat or taking a dip in the holy river. No crying at all!

From Varanasi it’s a day’s journey by train to Guwahati. The further the train went, the more fun everyone had. By the time we reached our final destination, Parijat, a school close to Guwahati, I saw a sudden change in Suman – she spoke to me even without being asked. All the kids wanted to watch a movie except her. So – as usual – Jayanti was trying to push her to watch. But Suman came to me and said: “I don’t want to watch the movie, I want to hang out with my new friends in the hostel!” What a bliss! Readily I asked her to do what she likes most. From the next day onwards, Suman engaged with her new friends and did things even if Jayanti wasn’t interested in. She helped the Parijat kids carrying bricks to the site where the new girls hostel was being built. She hung out in the hostel or in the kitchen or in the playground.

A few times Jayanti was left alone, and sometimes Suman simply took the lead and Jayanti followed. They were now becoming more like friends. Jayanti who never touched Suman’s plate, was slowly freeing herself from the restrictions the society she was born into takes so much for granted. 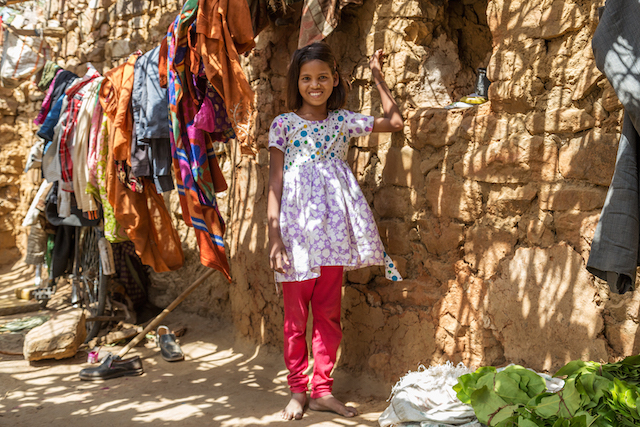 The most beautiful change happened when Suman got a new haircut. Oh, she looked so cute! Many people complimented her. The Janwaar boys – naughty as they are – were teasing Jayanti that Suman was more beautiful than her 🙂 Eventually, Suman started taking care of herself. She combed and oiled her hair and she washed her clothes. At school she was learning the alphabet. She showed me what she had learnt and promised to continue her studies back in Janwaar.

In just 15 days of travel, Suman changed from a shabby-looking, shy, silent, lost girl into a happy, aware, and confident girl who took care of herself.

The power of travel and exploration 🙂